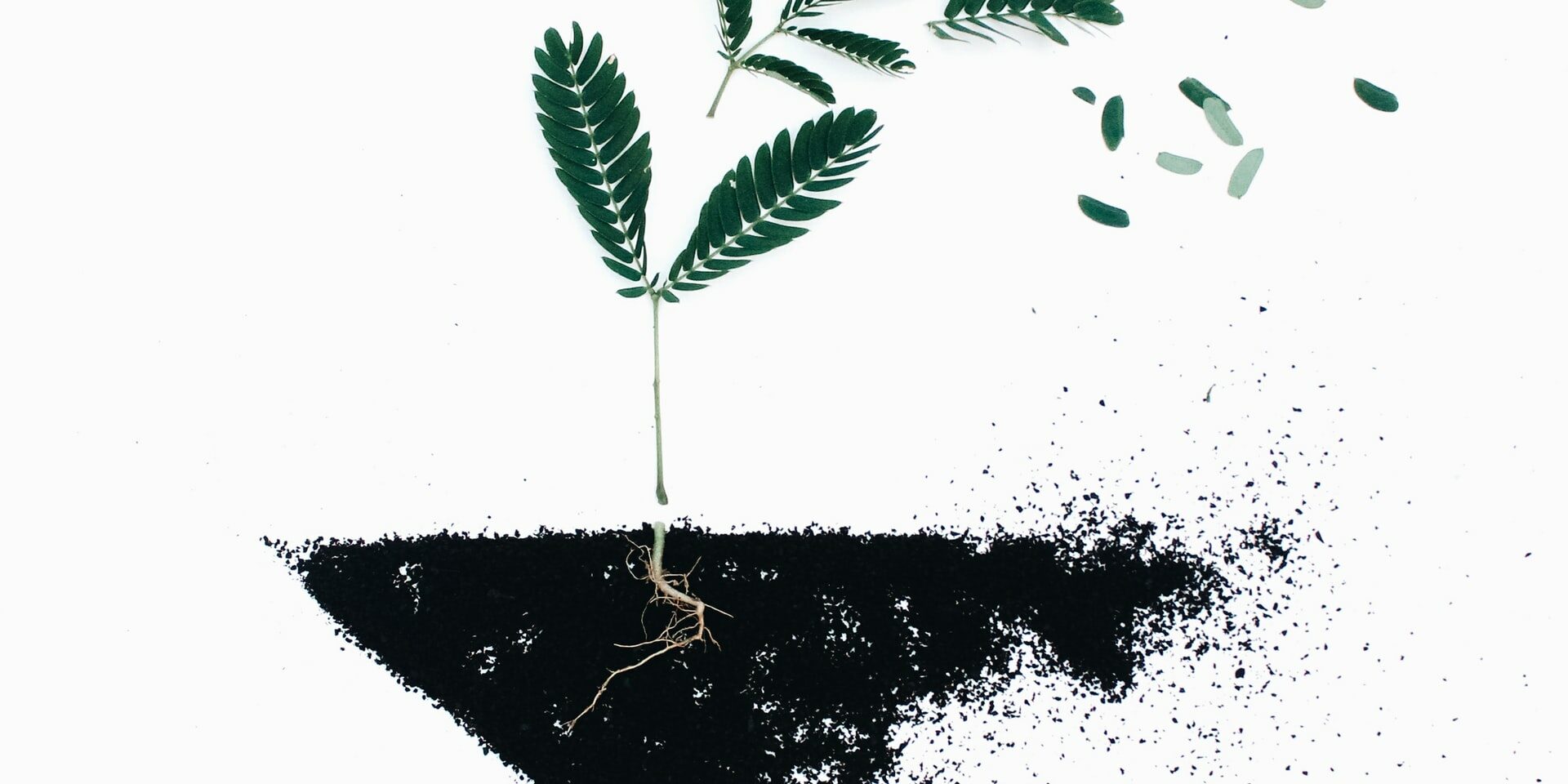 “Nature’s book always contains the truth; we must only learn to read it.”

The truth is obvious in every event and occurrence in nature, and it becomes easier to read. Sepp is correct when he says we must learn to read it. Soil biology is no different. Even though everything that happens under our feet is at a microscopic level, its effects are visible and lends itself out to education. Healthy soil will show in its many ways it is lively and well. The growth it sustains, the variety of plants and insect life that thrives in it and on top of it, its water infiltration abilities and the moisture retention all speaks louder than words. The color, the smell, and its temperature add another dimension to its song. Let’s take a deeper look inside soil.

When speaking of dead soil, or sterile soil, we refer to compacted, dull ground devoid of life – a common sight where humans dwell without managing their responsibilities. Dirt roads, walkways and traditional agricultural crop fields are amongst a few examples. We can’t blame people who don’t know, however, and therefore I want to explain some things we expect to (should) have in the soil below our feet, between our toes and fingers and why it is imperative to nurture and care for them.

As always, thanks for being here and reading. I hold no patent on learning and claim no virtue in it either, so comment on this article if you have anything to add. Please consider supporting these articles and our future endeavours to make the world better and simpler by becoming a Patron or supporting us.

Microbes are the armies of the microscopic world. Mankind assumed tiny life-forms existed since the early days, but during the 1600s, we had the capabilities to look at them through microscopes and confirm their presence. Microbes are utterly diverse in form, live in every habitat from the frozen arctics to boiling geysers, and exist inside, outside or around plants, animals, rocks, etc. Without micro-organisms, we could not produce vinegar, wine, beer, cheese, or antibiotics. They can clean up water or cause it to rot. They are everywhere, and without them, nothing would exist.  But what does it mean for soil?

People like Gabe Brown refer to the “Soil food web” a lot. It sounds like something edible, and it almost is. All soil life, in healthy soil, needs carbon to exist. This carbon stems from the breakdown of other organic matter, dead organisms, bacterial waste (metabolism) and exudates from plants. Soil must be alive, and for it to be alive, it needs to have a fully functional circle of life or food web.

You should identify some life-forms in there, ranging from 1 micron bacteria to mites that are a couple hundred microns in size. In between lies nematodes, protozoans and fungi. I said before that most of these little soldiers in the soil need carbon to fuel their metabolisms and nitrogen to create the enzymes needed to break down materials in the soil. We can expand on this a lot more for composting, where the nitrogen/carbon ratio and the fungus/bacterium ratio relates; determining(predicting) the resulting compost chemistry and which plants will thrive in it. Composters manipulate these by adding different matter to their piles. Working soils with poly-crops will also show much larger diversities and healthier ratios of carbon and nitrogen, than mono-crops. This falls outside this article as we look at what each little being in the soil does instead.

Fungi are one of my favourite aspects of soil biology. It is one of the major decomposers and breaks down wood lignin, cellulose, and other matter too difficult for bacteria. You may have read about no-till or no-dig before. Fungi thrive in these undisturbed, acidic soils as it builds up a network of hyphae, a fine mesh running throughout the soil and in between living roots and dead matter. It also dominates in a higher carbon based soil and mostly around the plants rhizosphere (area around the roots). Mycorrhizal fungi are more often than not part of extensive relationships between plants and organic elements in the ground. It aids not only in breaking down things into useful nutrients and minerals but also acts as little highways for bacteria to travel on. These “highways” can be meters long and carry bacteria between areas that would have been impossible to travel through.
Since almost all plants have diverse relationships with fungi in the soils, their diversity can affect the soil ecosystem significantly. Altering these plants in an ecosystem, can encourage the development of differing ratios of bacteria and fungus, and result in preferential supplies of nutrients, vitamins and matter, and control (or even suppress) root diseases in the soil. Competition with other fungi can help prevent pathogenic organisms from taking hold. In short, you need to ensure that your fungi are happy, but you can direct the soil-building to suit your needs by having specific plants in certain areas. Fungi spores can live for tens of years awaiting ideal conditions and can disperse themselves by springs/jumping, jet propulsion or by scent. They need constant sources of fuel and recycle more carbon than nitrogen.

The smallest members of the nitrogen fixation armies in our soils, with very simple cell structures and no organelles, bacteria thrive in disturbed soils and lower carbon/nitrogen ratios. Nitrogen-fixing bacteria will coexist with the roots of plants like legumes and certain trees by infecting their roots with visible nodules. The plant roots will exude carbon, which the bacteria will use to convert nitrogen from the atmosphere into a form usable to the host plant.  Other forms of bacteria will nitrify ammonium into nitrite and nitrate, preferred by grasses.  Denitrifiers are present in oxygen-free environments and exist anaerobically. Bacteria, unlike fungi, prefer the easier to digest food sources like those exuded from plant roots or fresher organic matter. Bacteria drastically alters the soil ecosystem, which results in plant life changes. Starting from ‘bad soil’, bacteria will establish themselves first at a photosynthesis level, mobilising nitrogen in the soil and forming life sustaining levels of nutrients before we can deem the soil system as “ready”.

Called ecosystem-engineers by Thomas Culliney, these exoskeletal invertebrates live in the soil. Mites, spiders, beetles, ants, and millipedes are but a drop in the ocean when considering the huge universe of arthropods. Commonly seen on the top, shredders like the millipede or termite will chew through plant matter, ingesting fungi and bacteria in one place, and depositing it in another. There are myriads of arthropods, and while each one type will perform a specific beneficial role, mostly all of them contribute to soil biology. A beetle eats beneficial bacteria and fungus from decomposing matter, a wolf-spider consumes the beetle which is eaten by a chicken that defecates and fast-tracks a composting process as it disperses the nutrient rich, bacteria laden matter in different locations. Acting like taxis, bacteria can hitch a ride on arthropods as they move around under the soil surface. Termites are another example worthy of mention, as their intestinal bacteria fixates non-dietary nitrogen, all while they carry and turn over organic matter underground. According to Culliney’s research, he estimates that 100kg per hectare per year of nitrogen turnover occurs via predation and mortality of termites.  Termite nests are superb habitats for a variety of microbial life that benefits mineralisation. Another vital point is that arthropods are earth movers, affecting soil structure and bringing deeper soils (generally less fertile and diverse) to the surface, where they can become a part of the soil-food-web in a more applied way. Their tunnels, holes and nests provide pathways for water and air to move through.

There’s a myriad of biota not covered here, and there are some planned articles coming up about this. Everything and everyone affect the ecosystem, but for the birds, snakes and larger organisms, we forget their usefulness.

Moles allow air and water to travel through the ground. Even in the hard, dry clay on my property, moles carve out the largest networks of tunnels while taking organic matter/humus to the deepest parts of their adventures. Lest we forgot their appetite for undesirable insects.

Birds are air freight seed couriers. Dispersing seeds across the surface in their excrements, dropping and stashing food across extensive areas. Friends, singers of merry songs and pest exterminators – birds are welcome in balancing our world. The big species and birds of prey will also help control the other numbers of organisms we previously discussed. Snakes, mice and other critters that may take over if left to the devices of human food wastage are solid favourites of the meat eaters. Birds contribute to soil health in several ways other than the poop and seeds. Think about carcass breakup!

Snakes are masters in the food chain as prey and predator. They control pests en masse, and everything they eat, poop or do happens inside or on the soil surface. Rattlesnakes can eat several thousand ticks per seasons, impressive but not a soil-benefit (editor: admittedly so). On this topic of reptiles, we can say the same for many of the lizards, geckos, etc.

A summary, the TLDR;

Soil is not just the stuff we see on the ground. It is a living network of minerals, elements being held together and processed, and the organisms that aid this processing. Bacteria, fungus and arthropods, nematodes and large animals all contribute to soil health. Different soils have varying levels of minerals and life in them, but they all live. It is our responsibility to repair the soils we have broken, to revive them by bringing life and moisture back so that the roots of our life-giving plants have a place to anchor themselves to. The biology will form cooperative exchanges of beneficial sugars and acids between roots, soil and air, while removing destructive elements from the ground. Plants can fix soil by covering it, keeping it cool and injecting imperatives into it, like nitrogen.

We know bacteria can convert chemicals, as do the fungi, and they need the trade between them and plants for life to exist both over and under the soil layer. No longer should we stand by and watch bare, dry soil remain. Observing what nature does, and where it works well, we can aim to replicate it in our own permacultural zones, and aim for diversity and repair rather than monotony and degradation. The result of happy soil is a healthy plant life, water infiltration, and many other benefits with zero downsides. Last, we learnt that pesticides, herbicides and other quick-fix chemicals upset or destroy the ecological balance of all life forms in the earth

In a future article, we will delve deeper into the world of nematodes, algae and specific kinds of fungus inside soil. Simple-Earth is all about learning and growing, and want to share only the knowledge that comes together at the time. No patent is held on knowledge, so share, enjoy and comment at your leisure. Thank you for supporting our Patreon campaign. It helps more than you know.

A land steward in training, figuring out self reliance, subsistence and simplicity on the Karoo farm that he lives on. Searching for balance, abundance and sense in a shrinking world. Marlon is a skilled software developer, electronics enthusiast and enjoys his deathmetal, electronic music and rock. Hailing from the Freestate, now lost in the hills of the arid Karoo, keeping it real (apparently).

Land stewardship is culture and relationships
2 May 2021

This site uses Akismet to reduce spam. Learn how your comment data is processed.

Support ongoing articles, photos, research and knowledge sharing by paying for our next cuppa!